Behind the Sierra de Bernia, surrounded by the vineyards of this wine producing region, the numerous pine trees which the region is famous for, and adjacent to the clear turquoise blue sea, you will find Moraira. Only two decades ago Moraira was a tiny fishing village: today it is a thriving town with an excellent infrastructure, and an attractive mix of small urbanisations and large villas situated in the surrounding hills. The mild sunny climate of the Costa Blanca region attracts a large number of hoalidaymakers each year. The small town of Teulada lies next to Moraira, approximately 30 kilometres east of Benidorm, and houses the impressive town hall. 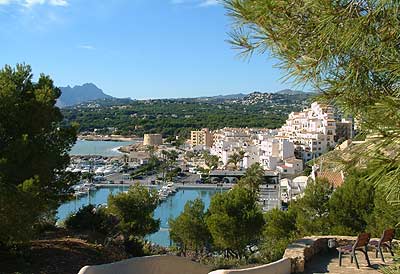 Objects of interest in this area are an 18th century fortress, which can be found on l'Ampolla beach. This served as a lookout point to protect the town from pirates, who were at that time all too prevalent. By the Playa de Portet there is a path leading the highest point of Cap d'Or. This is known as the Torre del Cap, and was also built by the townspeople as a watchtower against invasion by pirates or hostile forces. In the heart of Moraira you can find the parish church of "Mare de Deu deis Desemparats", which was probably built between 1875 and 1878.

Castell Moraira
This fortress, which stands on a rocky hill at l'Ampolla beach, was built in the18th Century. Over the entrance hangs the royal coat of arms of the Bourbons.. >>> read more

Parish Church of the "Mare de Déu dels Desemparats"
This church was built between 1875 and 1878, and is situated in the centre of Moraira. >>> read more

Torre de Vigilancia del Cap d´Or
The Torre del Cap d'Or stands at the highest point of the Cap d'Or, on the edge of the rocky coastline. >>> read more 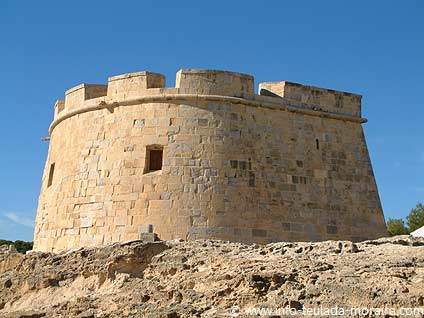 This fortress, which stands on a rocky hill at l'Ampolla beach, was built in the18th Century. Over the entrance hangs the royal coat of arms of the Bourbons. The date of 1742 which is shown on the arms probably indicates the year of completion of the construction work. The Castell was built as a means of protection against attacks by Berber pirates. The unusual shape of the building is commonly known as a pezuña de buey (ox hoof), since it has a semicircular southern facade and a straight northern facade, through which one passes to the interior of the Castell. 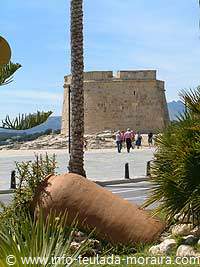 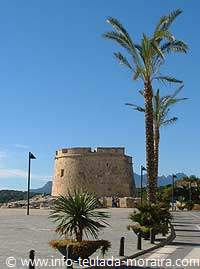 The interior is divided into three wings and two floors, with a height of ten metres. Lookout posts were established by means of small slits in the Castell's walls, and gun ports were located a various points, on which cannons were mounted. The building was completely restored at the beginning of the 1980s.

This church was built between 1875 and 1878, and is situated in the centre of Moraira. It is rectangular in shape and divided by means of columns into 3 naves, with the main nave being nearly twice as large as the lateral naves. In 1981 the body of the church was extended, and 4 arches with crystal windows were constructed in the form of traditional "riuraus".

The new rectangular bell tower houses two bells. The inside of the church is quite plain and simple apart from a portrait of the church's namesake, the Virgen de los Desamparadosa, and two mosaics, one of which decorates the main altar and the second which depicts the crucifixion of Christ. Both mosaics are the work of the artist Ros Martí. 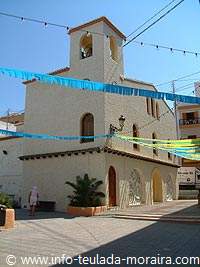 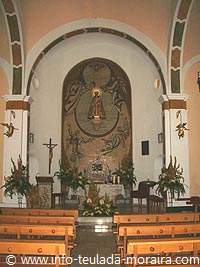 The Torre del Cap d'Or stands at the highest point of the Cap d'Or, on the edge of the rocky coastline. It is circular in shape, with a perimeter of 26 metres and a height of 11 metres. The tower is solid, and there is no doorway; to ascend the tower, a rope ladder was let down from above. Two cannons were situated on the tower in order to provide a defense for the port of Moraira. The Torre del Cap d'Or forms one of the protective devices which the engineer Antonelli recommended to King Felipe II, in order that the town could be defended against the Berber pirate attacks. Approximately 126 metres to the southeast of the tower stands a rectangular well, which would have been used to supply the soldiers on lookout duty with water. 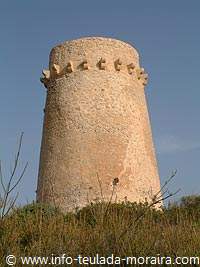 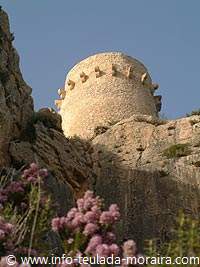